Kids in the Shed!!

60 kids from Hertford Infants School at the workshop. 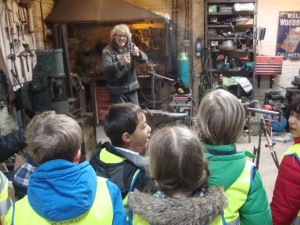 …to an attentive audience:

then the walk back to school, and they’re all exhausted!

See the Kingfisher class blog at:

Here’s me giving a talk to Hertford Infants school assembly.

A quick history of my career to date, from automata and furniture, to public art and demo’s of the Mr Watt eBooks.

What a receptive and appreciative audience!

(with thanks to: All at Hertford Infants School & Branwen Lorigan branwenlorigan@googlemail.com ‘Arts, Education & Creative Economy’)

Thanks to Clive Baldwin for this shot of the ghost train ~ and here are some others if you haven’t made it to the bottom of the Jenny Lind Locomotive post yet.

Posted in Mr Watt Goes to the Museum | 1 Comment

At last, Apple have finally given the all-clear on the Arts Council funded  “Mr Watt Grumpy Man of Metal” ebook; almost 9 months have been spent putting the film, animations, demonstrations and stories together; here’s the official link to buy it for your iPad, or to just check out some sample pages:

Here’s a link to the cover art:

And here’s a link to a promotional video

About 4 years I ago I was asked to produce a design based on “people” to go on the sides of a new footbridge in Andover, which Persimmon Homes had to provide as part of their new housing development scheme. At the time I had recently sold “Stickman” (to Darren Shan the teenage horror writer), and as the site for the bridge was flanked by trees, I proposed making a series of running “stick kids” running from one side to the other, and using the bridge as a sort of backdrop to a simple cartoon/illustration.

The job was duly forgotten for a few years and then suddenly the phone call comes, engineers are poring over details, deadlines appear to be tight and stressful and work has to start in order not to miss road closures and cranes etc etc. First off – get a load of tubes of varying diameters rolled to various radii:

All tubes have to be sorted and cut to various lengths depending on the limbs that they are representing. There are going to be 14 figures in total, 7 boys on one side and 7 girls on the other. The bridge fabricator will be welding in 3 horizontal rails across each side of the bridge; these will be my datum and I will make a jig based on the centre-lines of these 3 support rails.

Once cut to the correct lengths, each section is heated up and ‘knocked about’ to make it more stick-like:

and then all ends capped to keep the rain out. Here’s all the components of one figure: 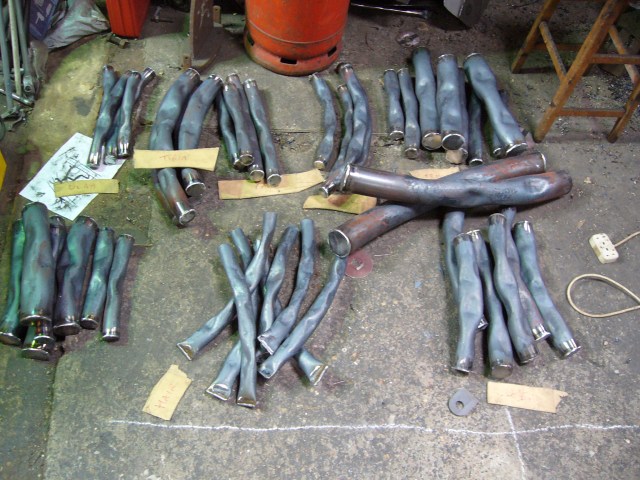 Original sketch is used to scale up the figures, and then assembly can take place on the jig: 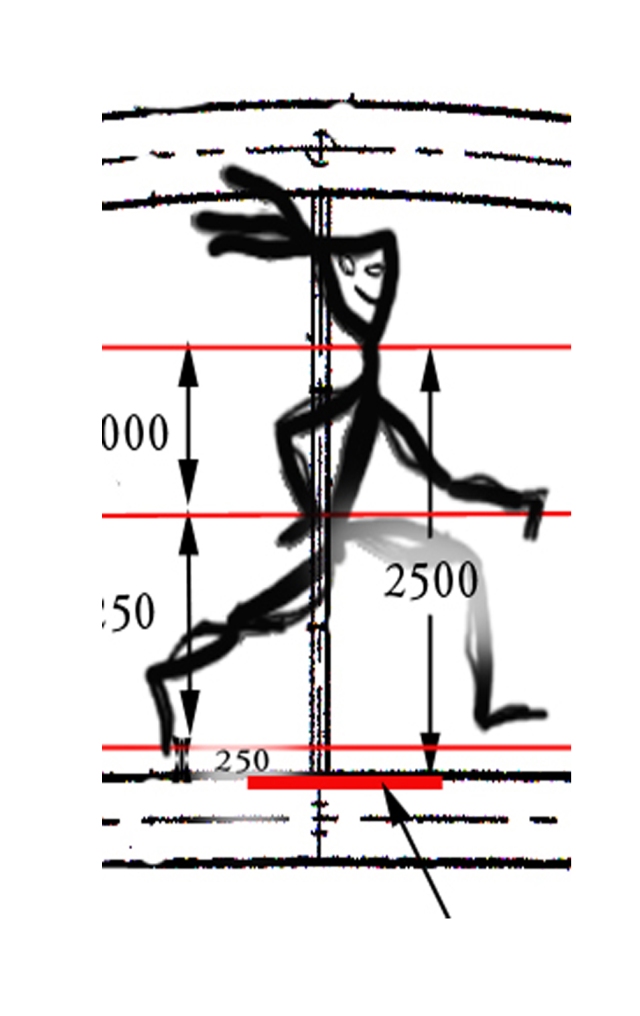 I’m hoping that the shorts/skirts and hands/feet will read as camouflage-like splashes of colour. The boys will be a yellowy orange, girls light green (with opposite coloured shorts/skirts).

The figures at each end will have a dog on a lead as well (powder-coated yellow): 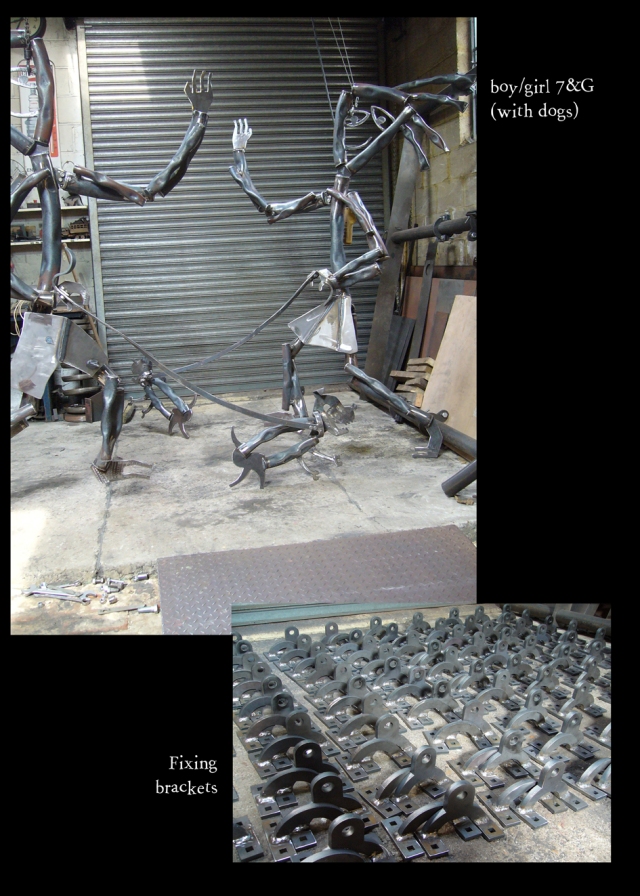 Picture also shows all of the fixing clamps that will be used to bolt the 14 figures to the support rails.

Now the work is all stacked up awaiting finishing/powder-coating, which will (hopefully) be timed to coincide with the one week road closure and crane etc. in July. 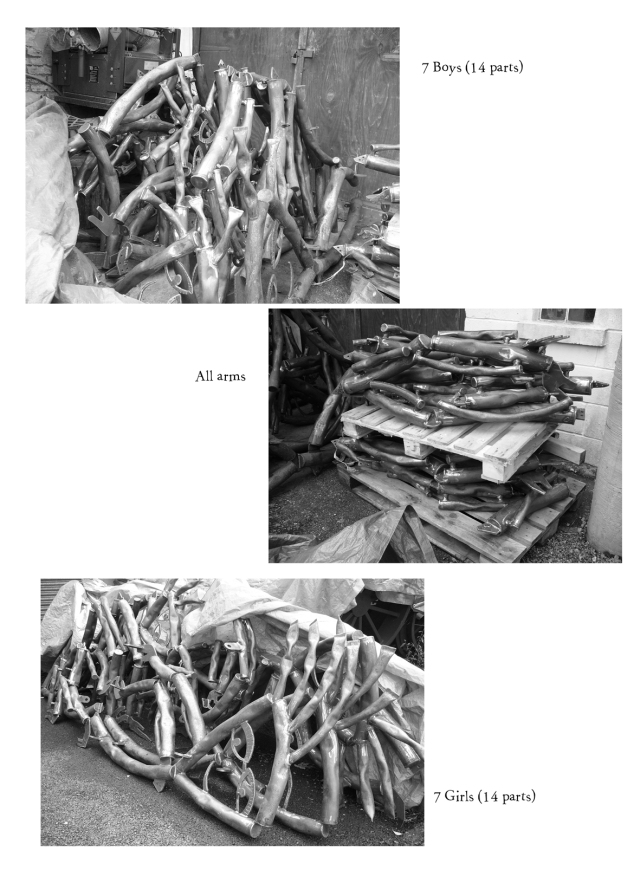 And finally: 2 days spent by the roadside, bolting the powder-coated figures on to the bridge structure. A great work team from CTS Bridges Huddersfield (thanks Phil, Phil and Mark!) and everything fitted. Road closure’s on Friday, and the crane will lift it all up and into position.

The final figure being lifted up and over and in to position: 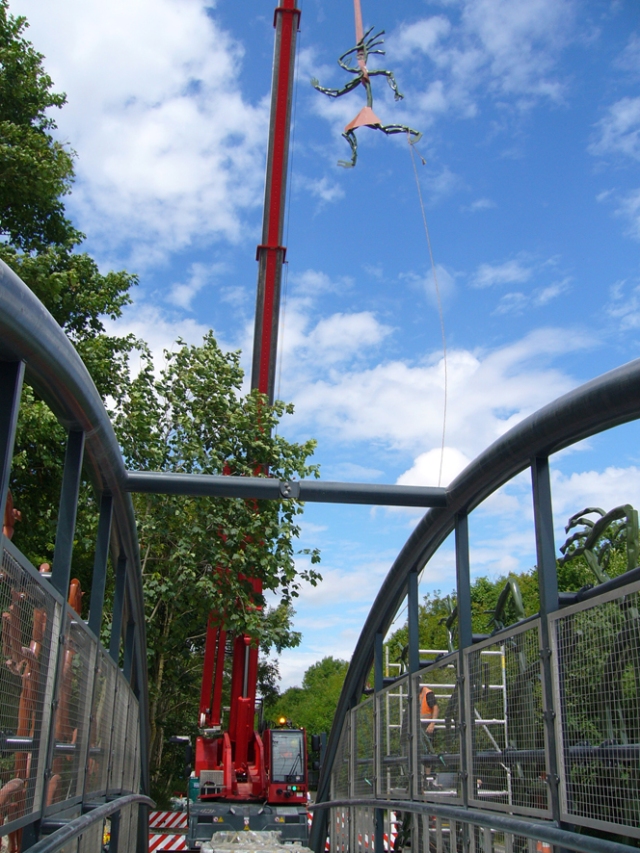 Posted in Mr Watt Goes to the Museum | 2 Comments

About a year ago I won a commission to create an Art Deco sculpture to stand outside the 1930’s Grand Ocean Hotel in Saltdean – a Butlins resort from the 50’s and now converted to apartments. Contract came through in the autumn following planning applications etc etc.

My proposal was for 2 pairs of dancing, cut-out silhouetted figures and 2 musicians, all in a Deco style, with Deco textile patterns cut into the dresses, period hairstyles etc. ~something along these lines, with colours to match window frames etc:

All figures to stand about 3.5m high.

First of all, get 3 tonnes of 10mm steel plate delivered (cue trusty fork-lift): 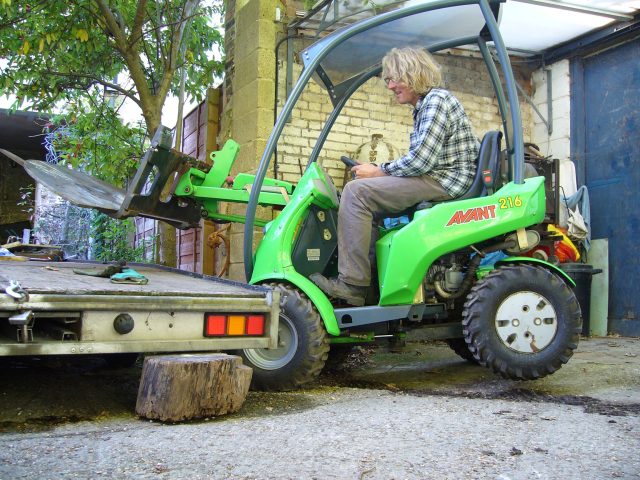 Scale up my drawings on to sheets of hardboard and cut them out as templates:

Chalk the templates on to the steel plate, and start plasma cutting out the blanks:

forge the double bass strings to give a nice quality:

and tune the bass:

and string them up:

Obviously – need some sturdy brackets etc to make them a)stand up and b)stand up to vandals climbing all over them:

Quickly jump all over them to see what happens:

Now get on with the dancers…..

And the second pair… there is some strange satisfaction in combining the deco pattern cut-outs with the stencil cut-outs such as the mans bald head, shirt and creases etc.

The work is all fettled and flat packed now, ready for delivery to the finishers and awaiting engineers report for concrete bases and fixings etc.

At last after a few weather-related hold-ups, the work has been installed and wrapped up in readiness for an unveiling ceremony in April. Installation pics by Jayne Babb: 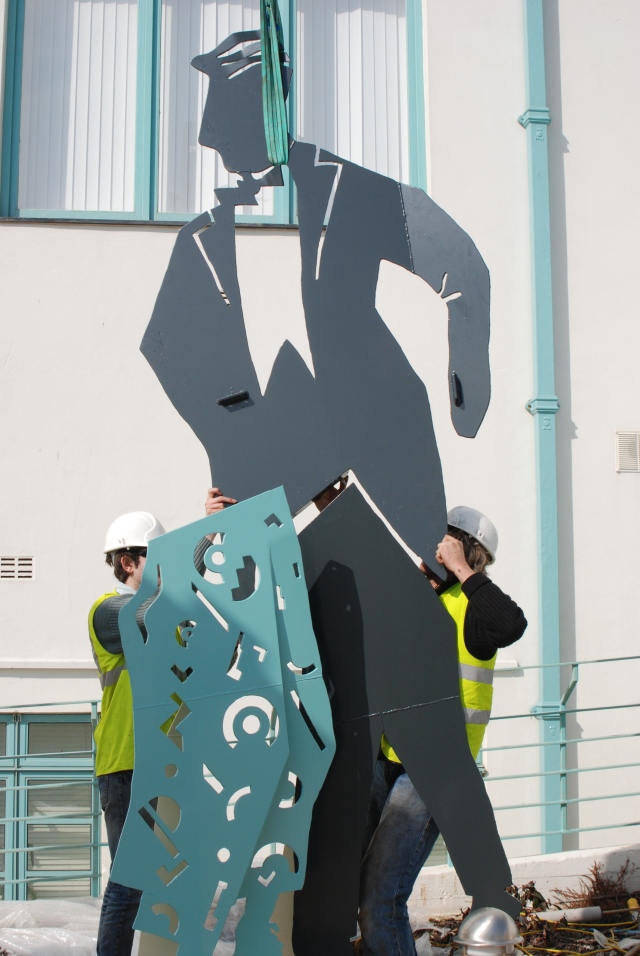 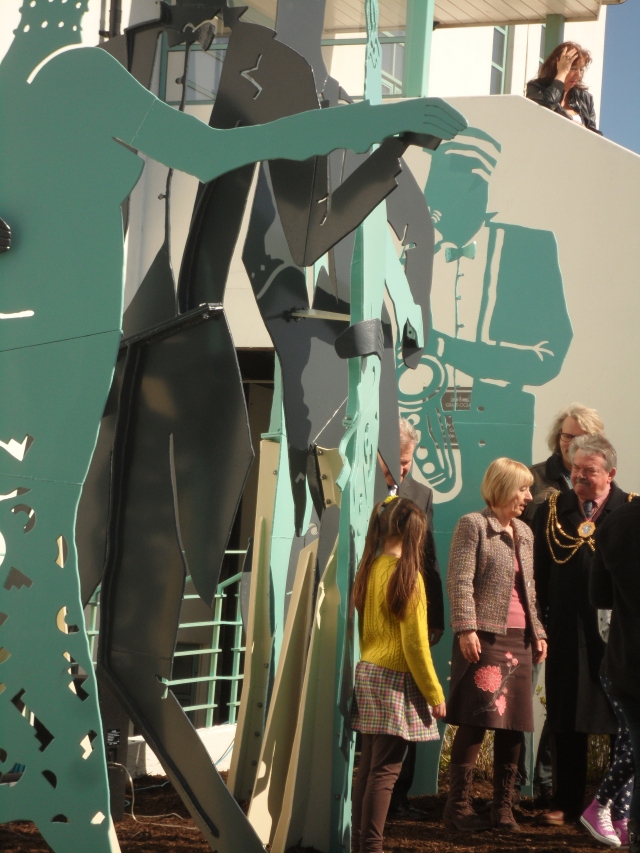 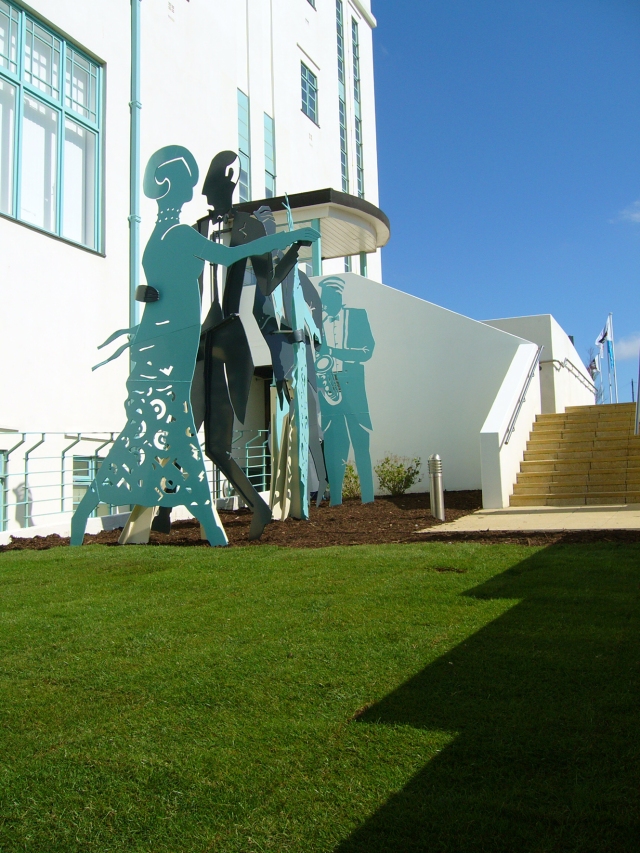 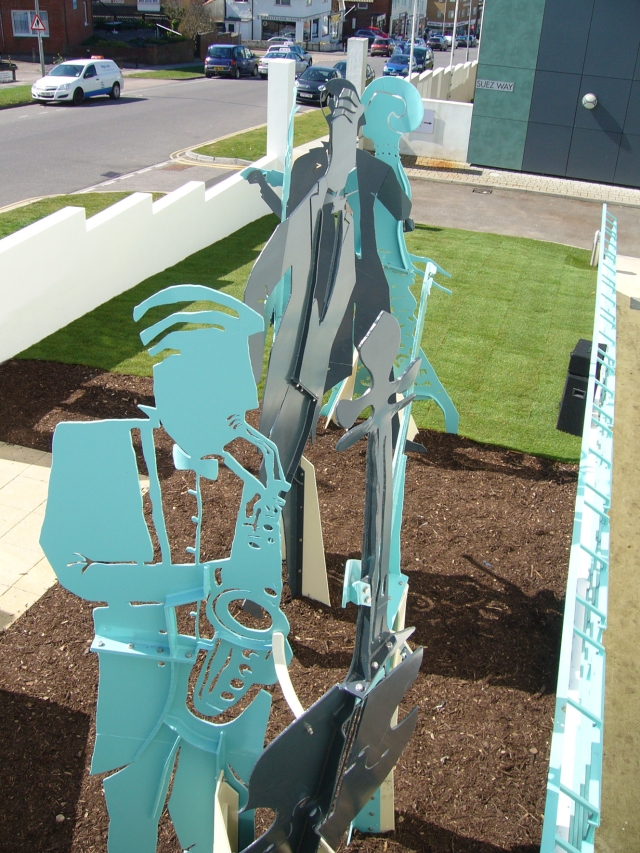 Next job…. 14  3m high running figures for a new footbridge over a main road in Andover.

Trumpet/own/my/blow ~ A new book out – and a whole chapter about me!

“Cut and Shut”, the History of Creative Salvage by Gareth Williams and Nick Wright.It was a real surprise to get such a good splash in this publication – not only did it ‘contextualise’ my work in relation to the era, it even ‘contextualised’ the old cars in my garage alongside Colin Chapman and Lotus (in a ‘men in sheds’ sort of a way!)

Just announced!! The winner of the Hastings Museum & Art Gallery’s competition “Mr Watt’s Holiday Souvenir” is……Indika Mamujee, for his Watt~ian version of the Museum’s “Chinese Horse”. (The museum commissioned me to make 2 of the winner’s design ~ one for the winner, one for the Museum.)

and here is Indika receiving his prize from Councillor Emily Westley:

All of the objects made for the existing 12 little booklets, are on display for 6 months.

It’s in a great setting, in the Enginuity Hall… surrounded by old bits and pieces of metal… fantastic!

There are over 60 objects now that have been made to illustrate the stories, the most recent being “Mr Watt misses the point”. He’s wasted his time making a giant submarine (because he can), but there’s no sea to put it in. Here’s page 9 (with apologies to I.K.Brunel): 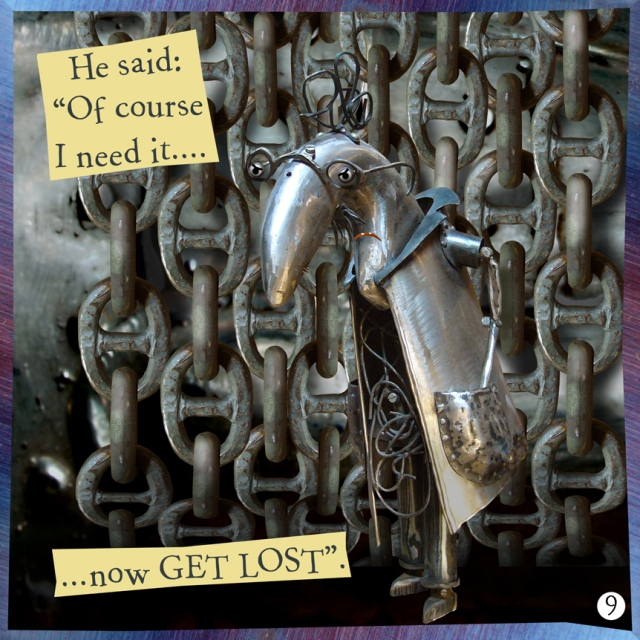 and here’s the cover: 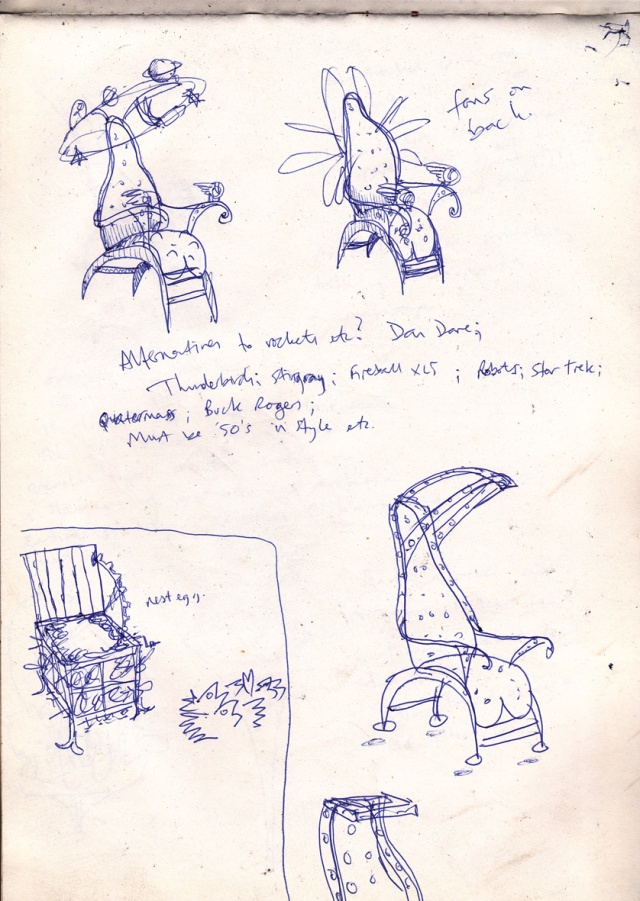 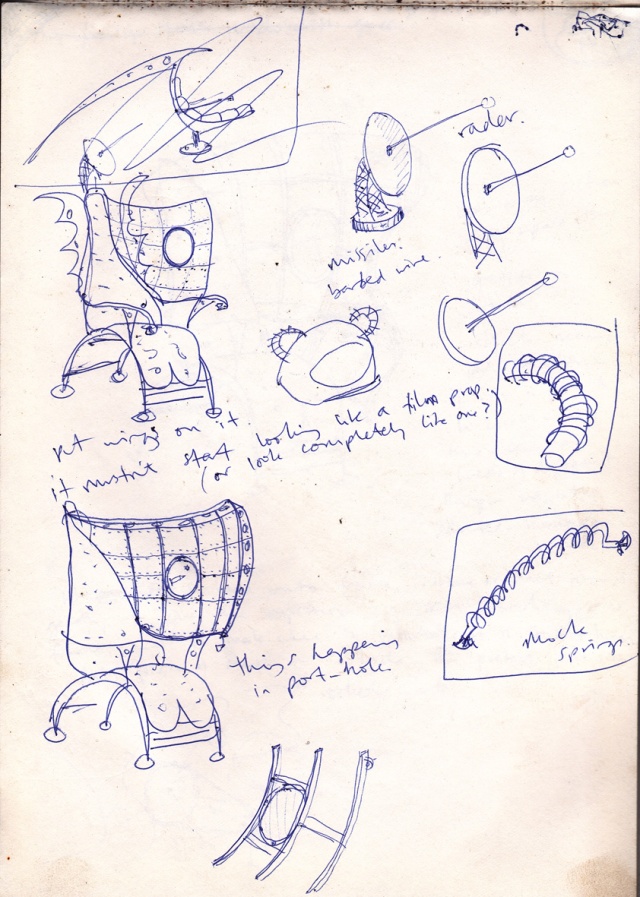 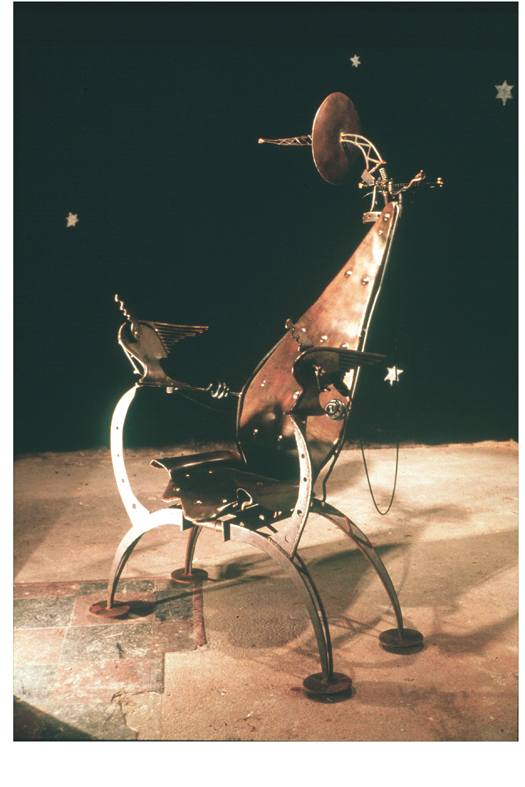 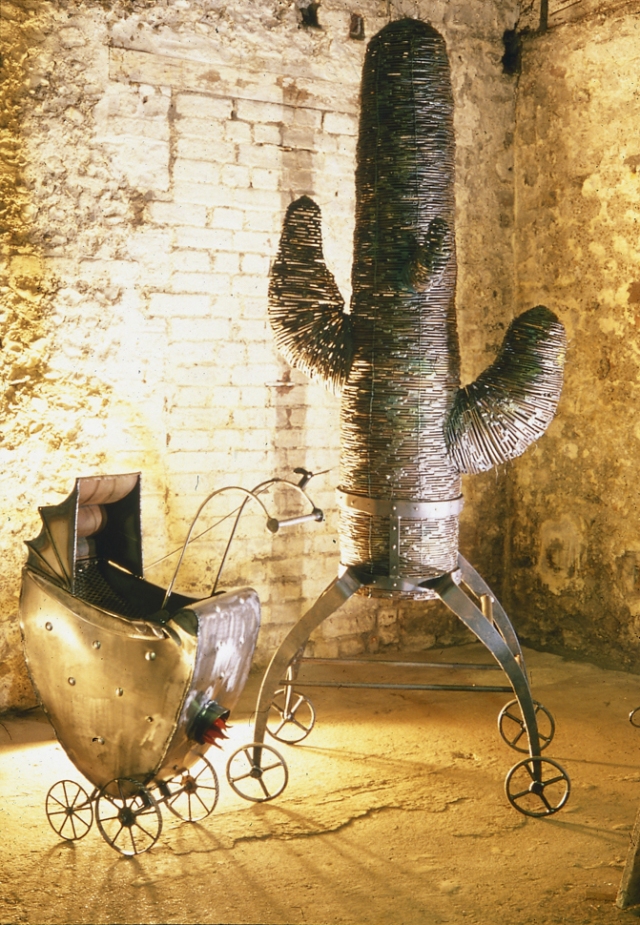 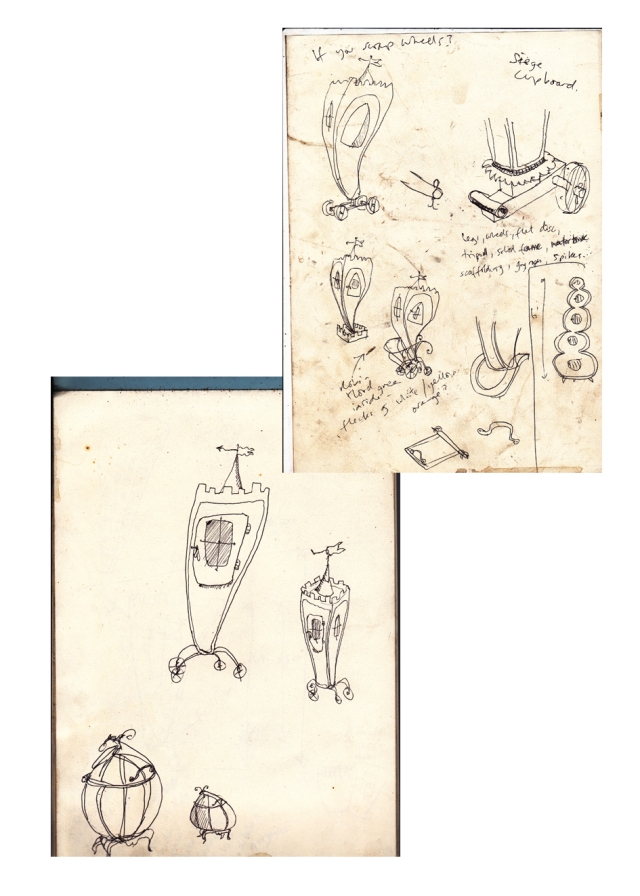 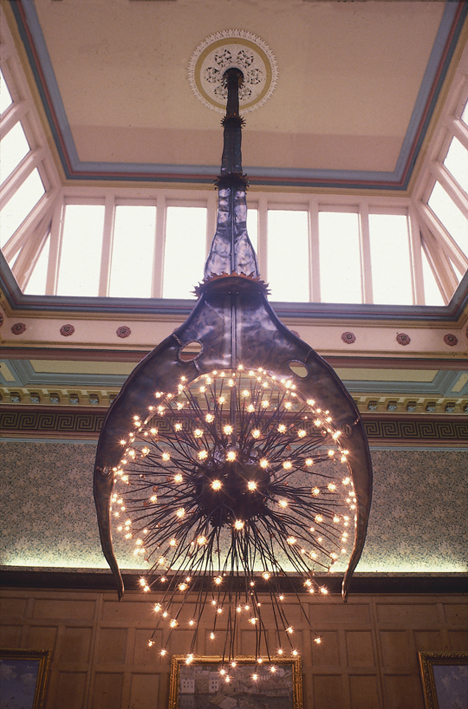 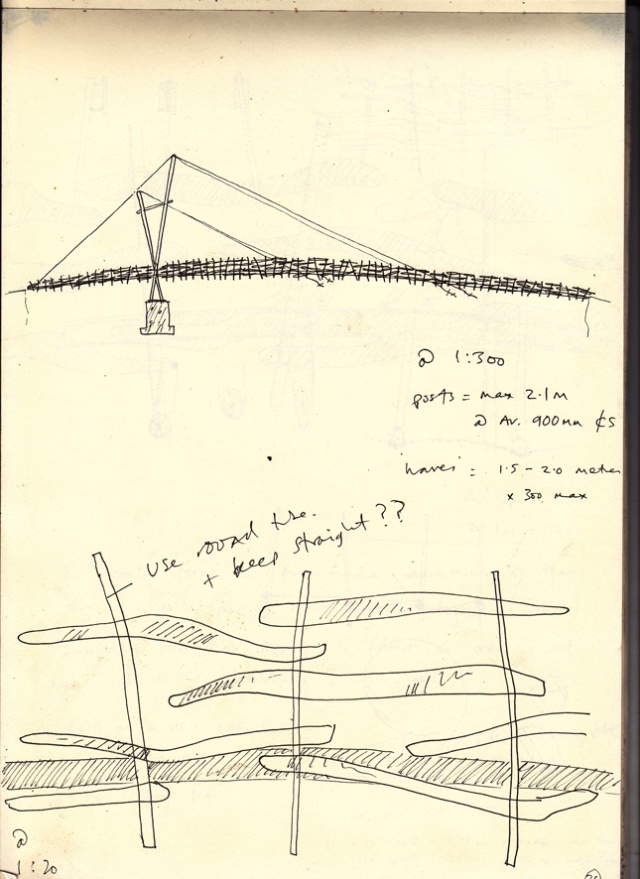 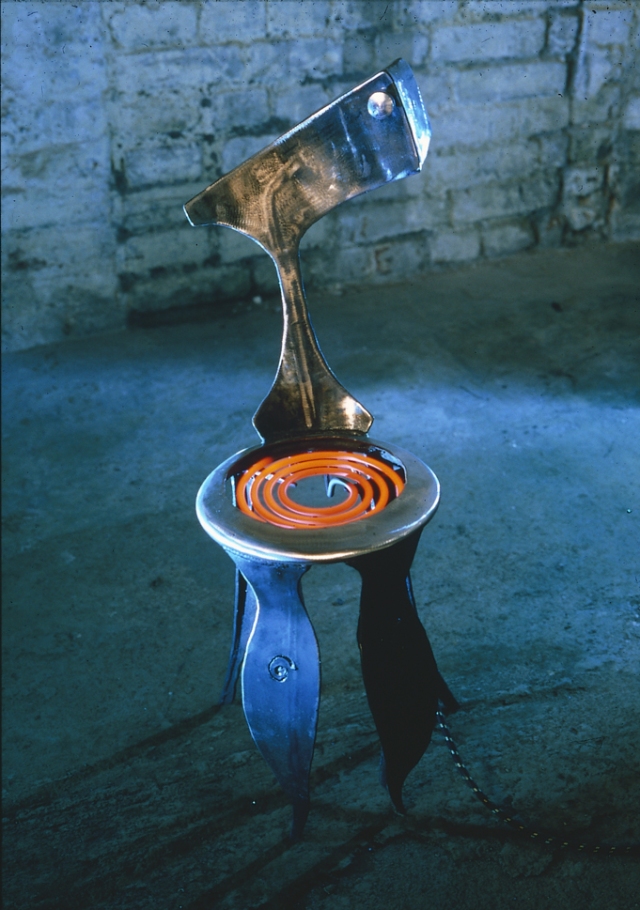