Mr Watt goes to the Museum 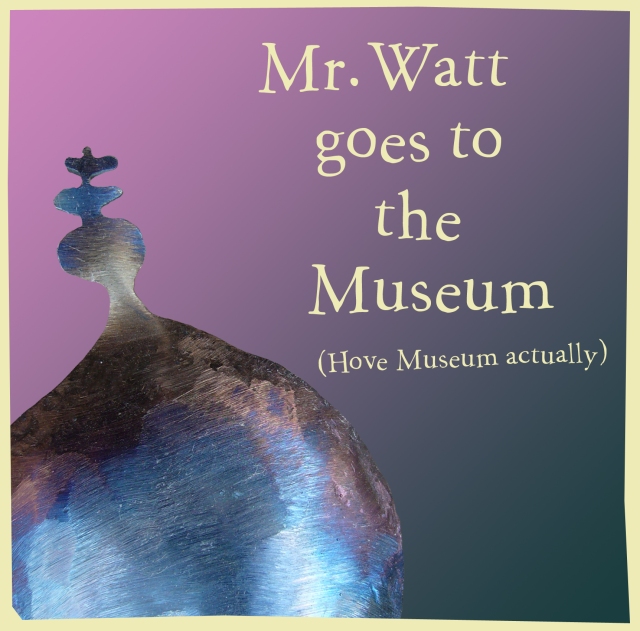 I applied for and got (16/12/2010), an Arts Council “Grant for the Arts”, to write a new ‘Mr Watt Grumpy Man of Metal’ book, which was inspired by the collections at Hove Museum. This will involve making specific objects which are then used to write a little story about Mr Watt donating some things to the Museum.

Said objects are to be placed around the Museum in the relevant show-cases, and form a ‘treasure’ trail for children to discover and then enter into a prize draw. The prize is the object that the Museum ‘declined’ to accept, which is what goes wrong for Mr Watt in this particular story. I will also run some workshops for local schoolchildren to come to the workshop and try out plasma cutting & other techniques to make their own ‘protagonist/antagonist’ characters & props – this work will form the basis of an exhibition in one of the galleries at the Museum & Art Gallery ~ all of the pieces I have ever made for previous Mr Watt books will be in the other gallery.

Some background about Mr Watt (Grumpy Man of Metal): He is a metal man living in a metal world making metal things that go wrong. He is my alter-ego; he is based on 30 years of worrying about everything I do. Think Clangers meets Captain Mainwaring.

Here is a typical page: 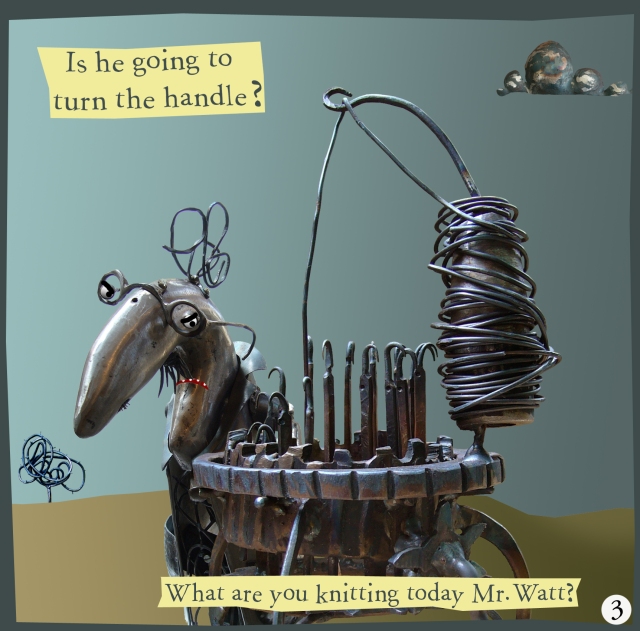 I make all of the characters and props, then photograph and photo-shop them into pages like the above. I love doing it and it makes me laugh ~ you don’t need to tell me about the impossibilities of getting published & the sheer competitive nature of the business etc etc, I’m just going to do it;  it’s hugely therapeutic and such a contrast to the world of architects, engineers, Health & Safety, vandalism & bureaucracy that seems to be the norm in my daily work-life.

The exhibition at Hove Museum is scheduled to start mid-March 2011 so need to crack on. Book will have to be ready to go to printers early to mid February.

Hove Museum & Art Gallery houses a large Craft Collection (including some of my work!), and lots of equipment from the early years of film-making, Hove being a base for the early pioneers. Other galleries include local archaeology, toys and ceramics, so there is plenty of inspiration to be had.

I wanted at least one of the objects to be film related – but what is something different that  Mr Watt would invent? And how could I gently tease Mr Watt about it in the story (which is generally the way it goes in all of the books). After a while an idea takes form and this is what I decided on: a special “Thought Projection Hat”.

A few scribbles and experiments later and it’s made:

This will now need ‘lasso-ing’ out in photo-shop (a job I (strangely) never seem to mind): 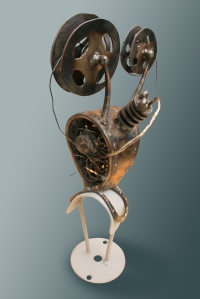 And then I can drop it into the page with text and play around with and distort the image etc: 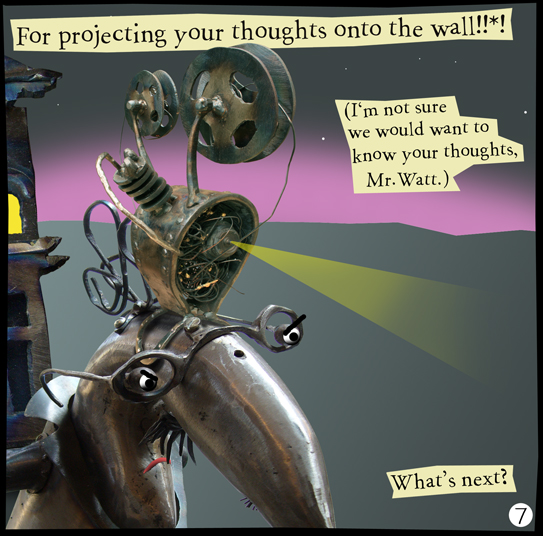 6 objects later, plus a few props such as the Museum itself and it’s all set for the graphic designer (John Christopher at White Design) to get print ready.

Other objects made include a fossil, a teddy-bear, a toby-jug, a pop-up book and a wheel-barrow for him to transport it all in. 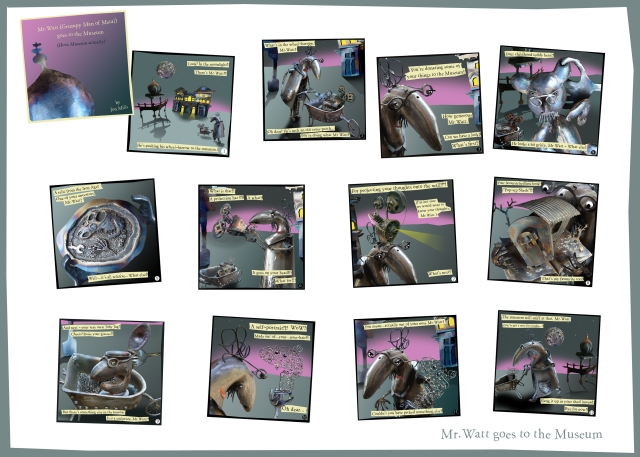 As you may be able to tell from these pics, the rejected object is a self-portrait made out of Mr Watt’s nose hair (couldn’t you have picked something else Mr Watt?) ~ this is the prize to be won by picking up a trail leaflet, and going around the collections ticking off the clues next to the objects.

Goldstone Primary School were quick to respond when Hove Museum sent out an invitation for expressions of interest re: workshops.

Following a session at the Museum to talk to the children, set a brief and get some preliminary ideas down on paper, 30 children came to my workshop in groups of 6 and got stuck in. The fact that the Steam Locomotive commission was still in the way just added to the fun…. 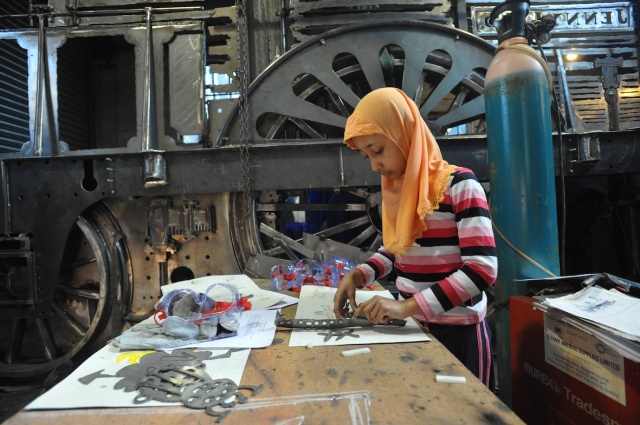 The children drew their designs out in chalk on sheets of 2mm steel, prior to me ‘guiding’ their hand whilst holding the plasma cutting torch…. 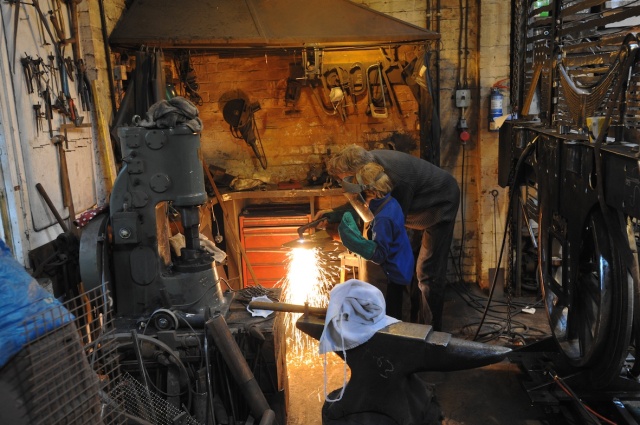 A bit of hammering required to remove oxidation slag:

…and some heating, light forging, general shaping & welding to create their finished designs:

Work is now in-situ at the gallery & the exhibition is open.

Decent pictures still to follow, but here’s an example of work by two of the children;       “An Elf doing the chores, being surprised by a clown jumping out of the dustbin”……where did that come from??

There are a total of 30 pieces, arranged in 15 box frames: 30 other schoolchildren wrote the text to accompany each ‘vignette’..

And here’s the entrance to the Mr Watt gallery….. 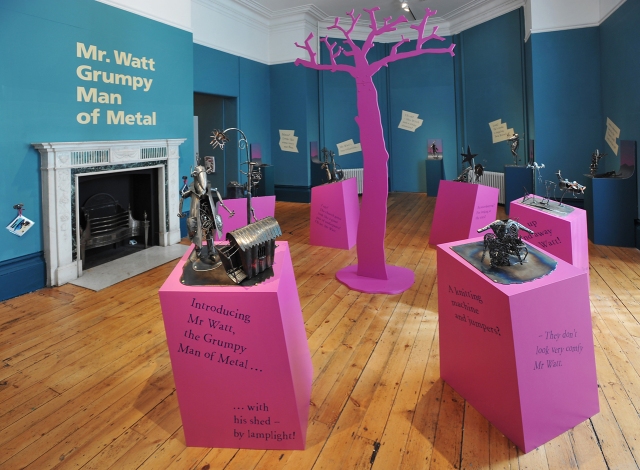 I'm the Grumpy Man of Metal. What more do you need to know? Bah!
View all posts by Mr Watt →
This entry was posted in Mr Watt Goes to the Museum and tagged childrens book, craft, grumpy, hove museum, jenny lind, metal man, metalwork. Bookmark the permalink.