And now, I shall be making a life size “2-dimensional” replica of an 1847 steam locomotive, the Jenny Lind…. 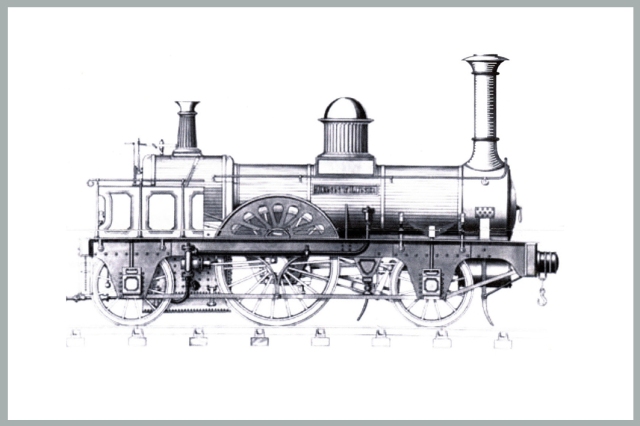 In 1847 the London, Brighton & South Coast Railway commissioned a new locomotive from the E.B.Wilson works in Leeds. Named the Jenny Lind (after the famous Swedish opera singer of the period), it became the most popular locomotive used on the line.

It was so successful that the name stuck for a whole class and more than 70 were built, including 24 for the Midland railway; at one per week it could be said to be the first locomotive to be mass-produced to a consistent pattern.

This 1:1 scale ‘sculpture’ is going to be cantilevered on a steel beam over a disused railway bridge in Brighton’s New England Quarter. Commissioned by Quoin Estates & Developments Ltd, it will be one of the public art features in Brighton’s soon to be opened green corridor walk.

Where to start? Oh I know.. at the bottom -the wheels; I know the main driving wheel was 6′ diameter, so I can scale everything up from there.

Here are the wheels suspended in their respective chassis sections, ready to be bolted together. At 8 metres long, this is going to fit from wall to wall in my workshop.

Next step – get the wheels & chassis sections all bolted together and standing on a jig.

The train will be mounted on a square steel beam measuring 400x400x10mm thick, so this jig will stand in for this.

I want to evoke the atmosphere of  a Victorian etching/engraving, whilst giving the impression of a Ghost Train from the past. The train will be lit up at night, and the lights will slowly fade up and down, so the train seems to appear and disappear.

I’m thinking I need to get the undercarriage etc all done to scale first, before I start getting all arty on the rest of it; in the meantime I will start adding some of the nice details, such as that lovely fretwork ‘mudguard’, the firebox, all the drive linkages….and that leaf spring on the front will make a nice little feature….

Time for a bit of something arty.

I’ve always been worried about how  I’m going to treat the boiler and top half in general. I don’t want it looking too flat, but by necessity it will; it’s the most visible half from a distance; I want it to look like an etching, but not too insubstantial, and I want to convey an impression of shading/hatchmarks etc etc. I’ve done a couple of experiments and cut them off, but now here’s the dome, and it feels like it’s what I’ve got in  my head.

I’ve used a mixture of plasma cut sheet and forged 6mm bar, in order to give an impression of shading on the one side; mixing the negative and positive shapes of shadows on the fluted surface of the dome. Forged bar is more akin to the bleeding ink lines of a drawing, and wibbly-wobbly is my style anyway…. 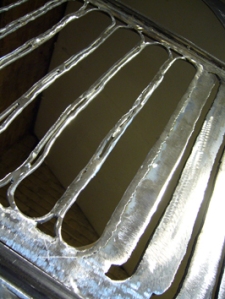 Thanks to Mike for these pictures of an early & a later Jenny Lind class: 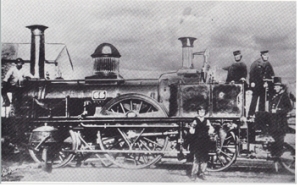 Same technique for the safety valve chimney, but with a 3D top:

…and now – scale up & print the name plate, stick it to a sheet of steel, and use a centre-punch to mark out all around the letters, before plasma-cutting it out and welding it in:

Making the boiler is the tricky bit now – so far it’s all been big chunky stuff, scaled off an old drawing. Now an artistic ‘interpretation’ is called for. I want to emulate hatch-marks & drawn lines – like a etchers ink marks etc.
For the boiler, this means horizontal lines in order to to represent a rotund cylindrical form; they would be close together at the top and bottom and getting wider apart towards the midway line. This presents problems….The wider apart they get, the more space there is between them, the more trees and background clutter will show through them and possibly detract/complicate visually. Just using open spaces to look like the background paper of a drawing isn’t going to work. And there’s a danger the whole thing starts to look like a giant flat venetian blind, or a louvred ventilation panel on a diesel loco. The horizontal bands can’t be too thin, otherwise when (not if) vandals etc climb on the train they will get bent; thin and transparent might be what’s needed visually, but it wont last long.
I have resolved to use colour to achieve some of the effect required, which entails making these boiler sections in bits and pieces, so that individual sections can be separately powder-coated – top sections a lighter grey, bottom sections darker. Annoyingly it wont be easy to imagine exactly how it’s going to look until I erect on site.

I have welded bits on and cut them off again so many times I have lost count. I know it’s not right until I walk into the workshop the next day and mutter ‘great’ under my breath when I see it afresh. And I muttered it this morning, so, progress! 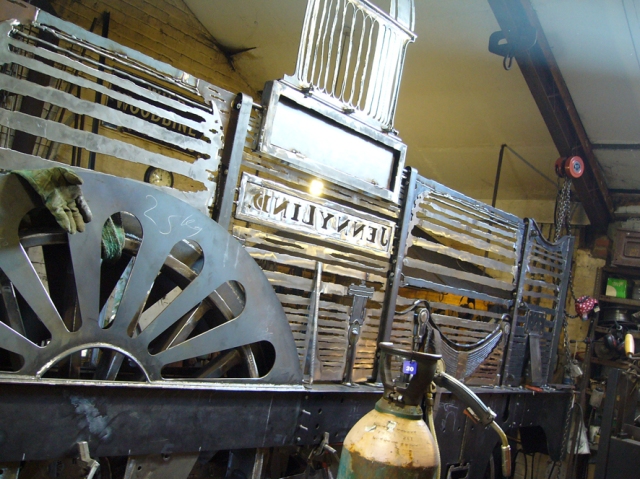 I like the way a ‘shadow’ can emphasise rotundity:

…and I like the way these little details break up the otherwise slightly monotonous flat areas: 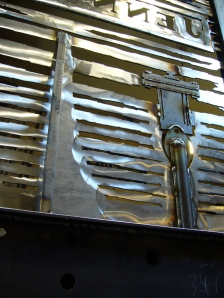 The back-end is my favourite part at the moment – there’s a real feeling of weight sitting on its back wheel, and it contrasts with the delicate little bit of forged handrail above:

Unfortunately, the Brighton Isetta works were not operating in 1847, else I could have put some bubble cars on the back end….. 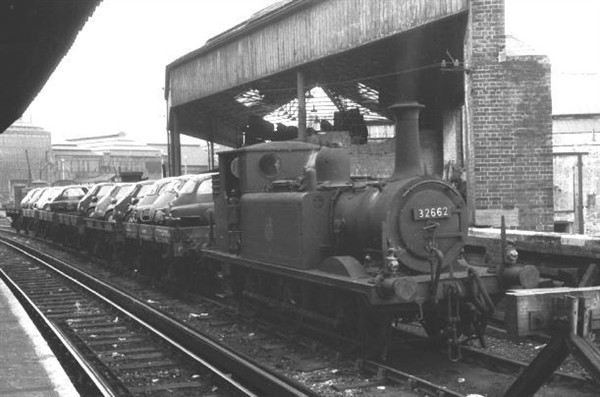 some ironmongery at the back end: 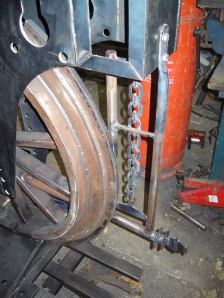 Time to consider lighting arrangements so I can make bespoke housings integrated into the work itself; here’s a drawing I’ve been using to scale everything off from, with some initial thoughts for positions of LED colour change units, following discussions with a lighting engineer:

Everything will go on the back burner for a few weeks now; jobs remaining include: make & incorporate housings for the lights, once they have been decided on; dismantle and fettle all pieces as they are removed; ‘flat-pack’ all bits into relevant piles depending on what shade of black/grey/white they are to be powder-coated- (all work will be shot-blast and zinc-sprayed prior to powder-coating); preparation of the site, to include installing the mounting beam; check electricity supply from existing street light supply and get an electrician to prepare etc. I will update this blog occasionally – my next project is an exhibition at Hove Museum of “Mr Watt, Grumpy Man of Metal” including a new (Arts Council funded) book ~ “Mr Watt goes to the Museum” ……what could go wrong? I hope to get a couple more extra stories as well, including one involving an old knitting machine & a witch..

A future book will feature a steam locomotive not too dissimilar to the Jenny Lind….

There’s been a lot of head scratching over the lighting of the train; Network Rail have finally lifted their objection to the train occupying their air-space over the bridge and are now conducting a ‘technical approval’; in anticipation of movement (and a desire to reclaim my workshop), the train is now flat-packed and catalogued ready to go the finishers for shot-blasting/zinc-spraying & powder-coating in 4 different shades of grey. 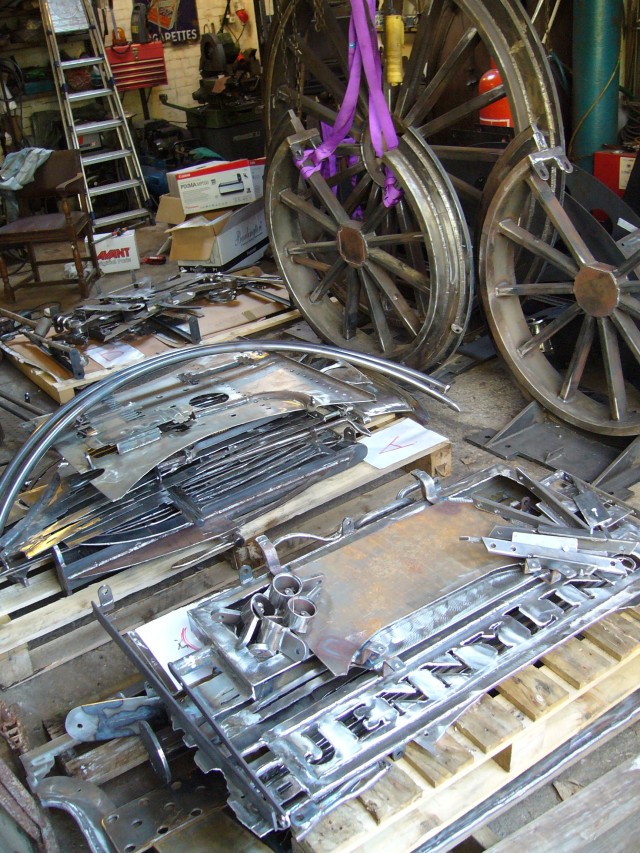 Recently ‘stored’ the support beam on site, ready to ‘slide’ into position when (if) Network Rail give their permission for the train to be “in their air-space” over the bridge. Beam is 11m long and weighs 1.5 tonnes. Delivered by hiab lorry (MPD Transport) and trundled up the green corridor on a makeshift bogey consisting of one land-rover axle….

Whilst on the subject, here are a couple of shots of some work previously installed on the Green Corridor. A series of “Clinker Shovels” hanging on the now defunct brick piers that would once have supported more railway yards and works:

…and a length of railings based on a tool rack of clinker shovels: 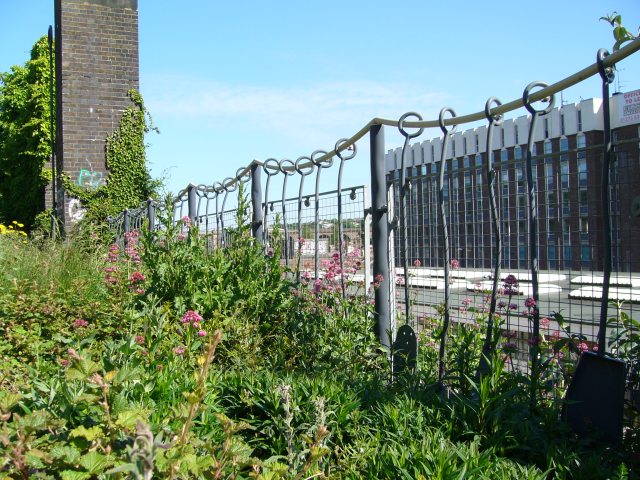 Meanwhile…. the latest Mr Watt book is now underway, with a train (sort of) inspired by the Jenny Lind – this story will be about the ‘railway coming’ and rolling over his shed: 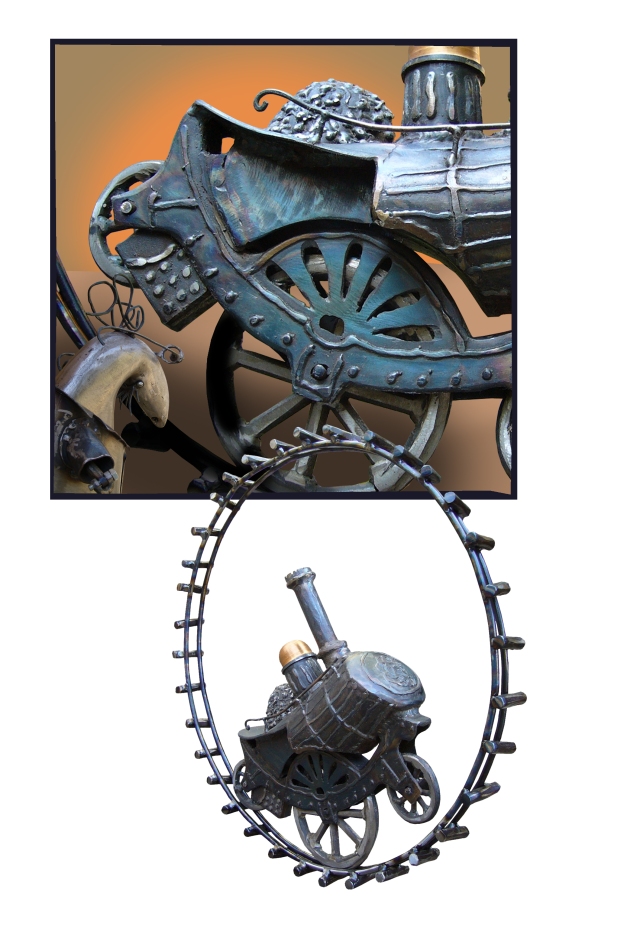 Chuff Chuff!!  After two and half years of sitting in my yard, the Jenny Lind has now been cleared by Network Rail to move out of the sidings and is on her way to be shot-blasted and powder-coated. Network Rail’s final quibble was what toilet and hand washing facilities were available for my use whilst installing the work (Of course it’s only when the last piece of hair has been pulled out that one finds out that a portaloo is only required for jobs lasting 30 days or more). 2.5 years in the open (albeit under tarpaulins), means 2.5 years of surface rust; removing the tarpaulins felt like revealing my very own miniature Barry Island steam graveyard: 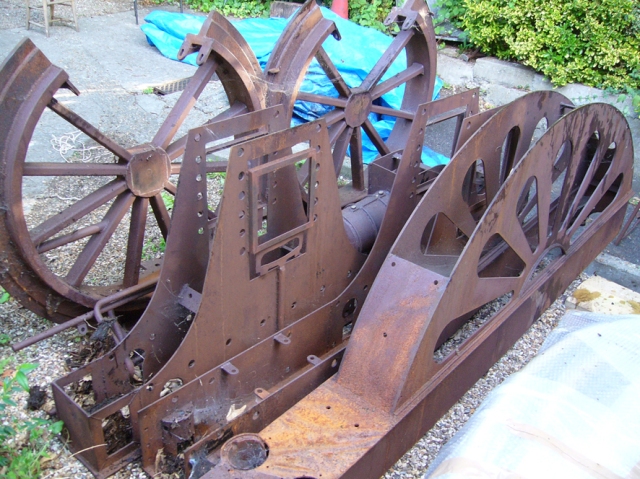 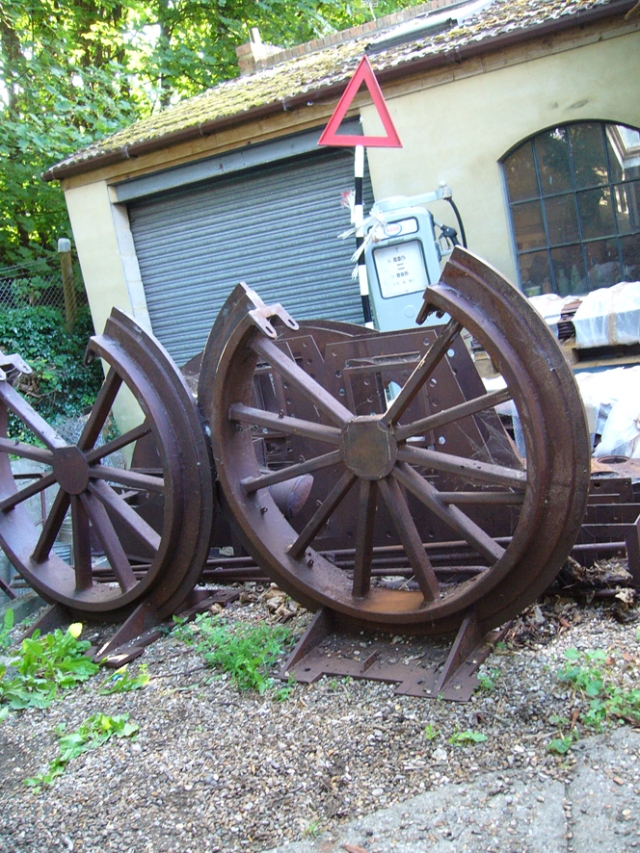 All loaded and off she goes:

Preparation: the support beam has now been slid into position and resin anchored to the concrete foundation pad to the side of the bridge, and two and a half years of graffiti painted over: 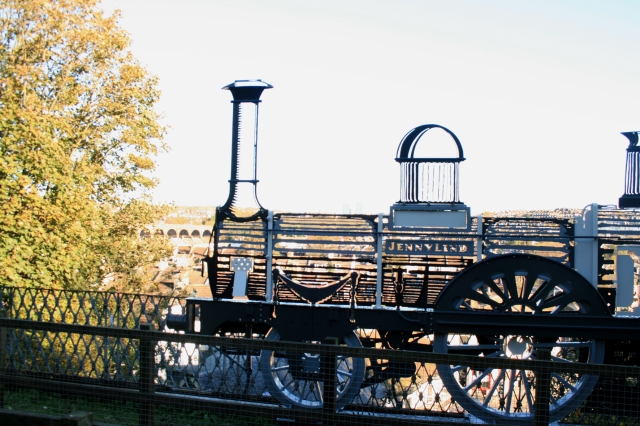 and here’s my original drawing from 2006 showing what I hoped it would like; almost got it right! 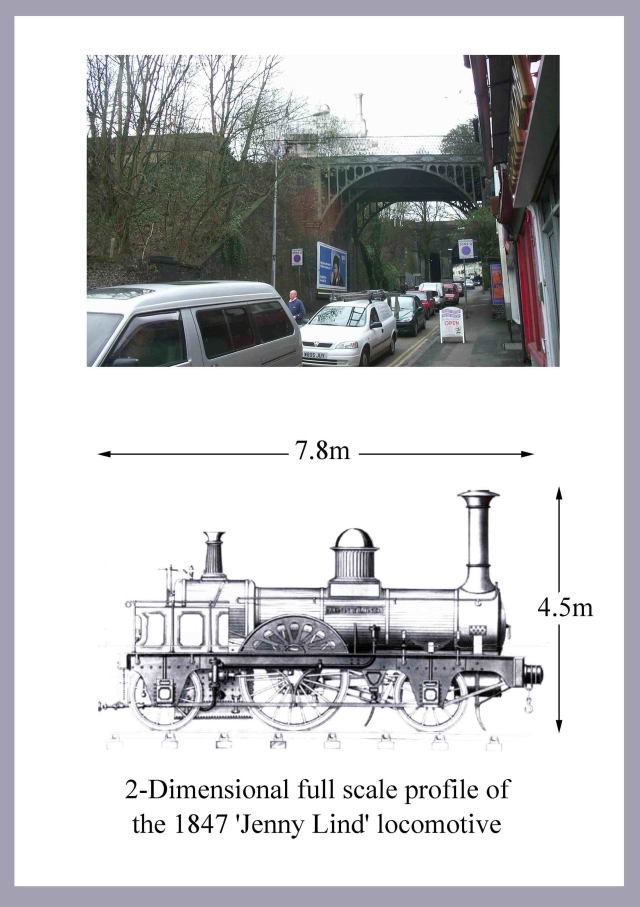